I really like settings like this in rl and on here, but in rl it can be dangerous to visit these abandoned places because you never know who or what may be using it now.  I’ve never been to an entire abandoned town in rl, but when you see footage of these places on TV and the internet it always looks like the people just left, like time just stopped once there was no one to watch the clock.  I read too much urban fantasy and watch too much horror to not let my imagination run wild when seeing these places.  So, of course I thought of the fae living in these abandoned places, but not exactly the fae you’d read about in folklore.  These fae would be some of the last of their kind still trying to live in a world that’s mostly forgotten they ever existed, a leaner, meaner, less magical race due to most of them being half-breeds.  They also might be a bit unhealthy mentally and spiritually because they are nature spirits at heart that are slowly but surely losing their link to an increasingly unhealthy environment.  If you were forced to evolve or die out what would that do to you?  What has it already done to us?

Hair & Hairbase – Spellbound  Jezebel – monochromes/  A box of all hairbases can be found on the counter for free.

Ears – Sinful Needs  Mesh Fae Ears S1D1  These are the most expensive ears I have ever come across, so far anyway.  Are they worth it?  If you’re going to wear them on an almost daily basis yes, but if you need them for an outfit or two then no.  With the included HUD, that looks more complicated than it actually is, you can do almost anything to these ears, tons of skintone, metal, jem, and plug textures, plus the ears are mod.  Other ear shapes, including human, are also available. 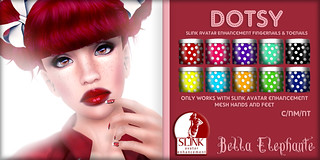 (HUD photo is not mine and links back to the creator’s Flickr.)

One thought on “Reclamation”